Have Fun With
Worktop Visualiser

SEE WHY WE ARE SO AFFORDABLE

The Difference Between Granite, Quartz & Dekton

This is probably the single most frequent question that we are asked at Affordable Granite.  Granite is 100% natural stone and Quartz is man-made using granite.

However, what we call “granite” in our industry is not necessarily what a geologist would call granite.  Granite worktops are made from a wide variety stone – all of which come from the ground, are natural and hard.

Quartz is “engineered stone” made from fragments of natural stone of various types, sand, glass and mirror which is then mixed with a petro-chemical resin and compressed.  For some products dyes are injected to give the appearance of natural veining but despite it looking like a natural stone it is infact entirely manufactured.

Dekton is also a type of quartz and made by the quartz manufacturer Cosentino.

Which is Best for Kitchen Worktops?

This question is a difficult one to answer as it depends on individual customer needs, appearance preferences and lifestyle.    Our general rule of thumb is to recommend granite if you are considering a dark coloured worktop and quartz if you are looking for light coloured worktops.

The second question, “Which is better overall?” is more complicated.  We would generally recommend granite in dark colours and quartz in light colours.   Here are the reasons:

Dark coloured “granites” tend to be genuine igneous rocks – crystallised out of molten magma way beneath the earth’s surface.  As a result they are low in porosity and have great resistance to any penetration by stains.  If the granite is dark or black then if a stain WERE to penetrate, there would be little chance that it would visible.

Lighter “granites” are generally metamorphic rocks formed from the coming together of sands and gravels, with other minerals percolating through and the whole layer being heated and compressed over time. They tend to have more larger pores than the igneous rocks.   This means that IF a stain penetrates with a light coloured granite then this may be visible.  Getting a sub-surface stain out is all but impossible, although they generally fade over time and are far less obvious where there is some colour in the stone.   Many of our customers still buy light coloured granites because of their beauty and natural patterning but we advise them to watch out for any break-down in the surface sealing, especially near the sink.    Here, the stone becomes darker when wet so it is more obvious that the water is entering the surface.  If there is colour in the water then this can also very easily get beneath the surface to leave a coloured stain or patches.

Quartz is completely non-porous because of its resin base.   That doesn’t mean it is impossible to stain quartz but that no stains can get below the surface.   A pen mark or curry stain may need some treating, but it will only be within the top level of the stone.

The picture below shows a patch of water on an unsealed piece of Colonial White granite. 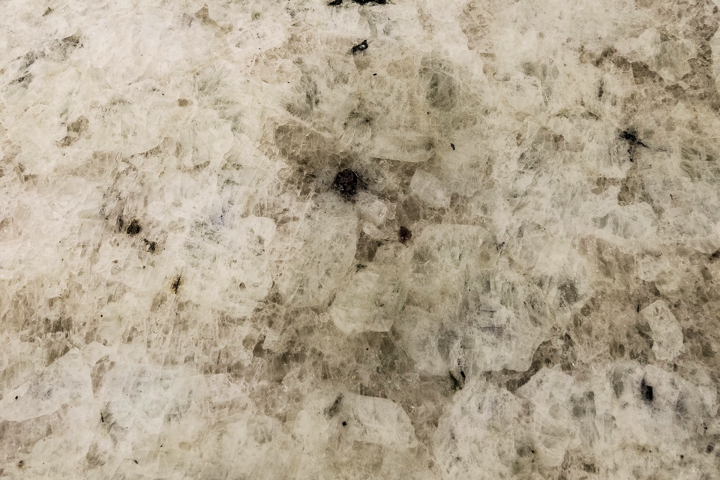 The darker patch left after the water has been wiped off, showing water penetration into the stone. When this starts to happen near your sink you need to reseal the granite.

Although both granite and quartz are very hard, it is nevertheless possible to scratch them – with other pieces of stone, ceramic, glass, or diamonds etc. One difference we have observed is that dark granites tend to scratch to a dark colour, whereas quartz looks lighter where it is damaged. The result of this is that black quartz can look tattier more quickly than similar-toned granites.  This is a significant advantage of black granite.

It would probably be fair to say that the high-end brands of quartz seem to suffer less from scratching and that patterned stones disguise imperfections better than plain ones.    Below are examples of scratching and wear and tear however these samples have endured much more than a typical worktop would do as they have been bashed against and slid over each other. 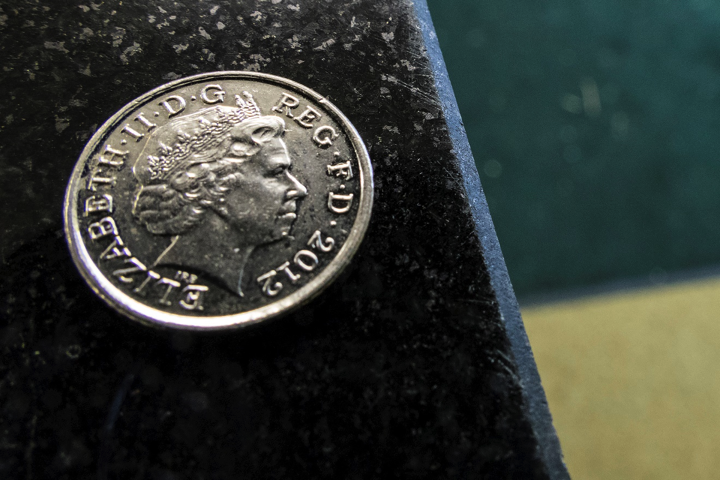 Fine scratches on a piece of Nero Assoluto in our showroom, where other stone samples have been dragged across it. The coin is a 5p piece. 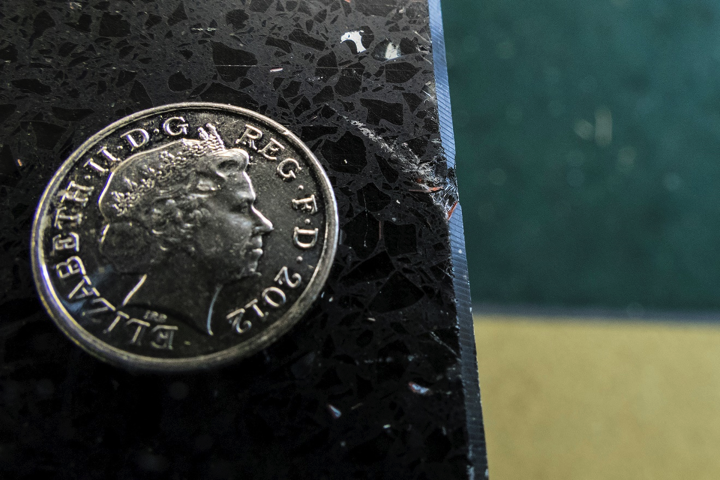 Scratches on the edge of a piece of black sparkly quartz, where other samples have hit or scraped over it. Note the lighter colour in the scratch. Both these images show EXTREME abrasion – they are not typical of domestic use within a kitchen.

For those reasons, it is probably clear why we tend to favour quartz in light colours and granite in dark. There are a few other differences, though, where one or the other product can have the edge.

Because of the resin/plastic element in the composition of engineered stones, quartz has a greater tensile strength than most granite as used for worktops. “Granites” themselves vary greatly in this respect as all stones are different:   the truly volcanic stones are very strong, but some of the larger grained metamorphic rocks are comparatively weak.  This can mean increased standard minimum clearances for cutouts, reduced maximum overhangs and, sometimes, overall run lengths.

With its higher strength, however, quartz worktops can be manufactured with easier tolerances and at only 20mm thickness if required. For some styles of kitchen a thinner worktop is preferred, and in that case quartz is definitely the best option.

The resin/plastic content in quartz can be attacked and broken down by ultraviolet light. Therefore, for garden tables, barbecues and any other outside application, only natural stone can be recommended.  If a man-made look is wanted, then Dekton® could be the best choice due to its extreme durability.